Three men are rowing from Oxford to London to raise money for local charity, Shipston Home Nursing. Their journey, which has been inspired by Jerome K Jerome’s 1889 comic novel, Three Men in a Boat, will start at Donnington Bridge in Oxford on Monday 18th May, and finish at Walton-on-Thames on Saturday 23rd May.

David Williams, Jonathan Davies and William Dockar-Drysdale will be sculling the 85 miles to London and will arrive dressed in full period boating wear.

William Docker Drysdale, from Whichford, who is the Skipper of the team, said: “In early 2015 Shipston Home Nursing provided fantastic support for my father in his last days and for that I will always be grateful. It’s great to have an opportunity to raise some money for this incredible organisation which totally relies on fundraising. The actual rowing bit, if I’m honest, is a long-held ambition inspired by reading Jerome K Jerome’s classic book, Three Men in A Boat, when I was a boy at a school where I think I spent more time on the Thames than I did in a classroom. I hope to bring some skill to the mission – we’ll see!”

The men will be taking an original Thames camping skiff and plan to camp on board. The boat has an easily erectable canvas cover which can be used for shelter from the sun and rain during the day. At night, it converts the craft into a floating tent. It will enable the three rowers to experience nature and river life up close and is featured in Three Men in a Boat.

Jonathan Davies said: “Accepting the challenge to row down the Thames in turn of the century boating gear in support of Shipston Home Nursing was not difficult. It will be worth every drop of sweat, every blister, every strained muscle to help our very own local hospice at home charity, who support so many people at the hardest time of their lives. And I’m comforted by our skipper’s meticulous planning – he’s promised a suitable watering hole round every bend of the river!”

David Williams, who is a GP at Shipston Medical Centre, said: “My Mother died several years ago of cancer at home, where she wanted to be, with her family around her. In my eyes and mind it was as ‘good’ a death as possible and greatly helped with my grieving process. As a local GP, I often have the privilege of witnessing the amazing work of Shipston Home Nursing and I see how they enable people to have as good a quality of life in their final months, weeks and days as possible. I’m looking forward to rowing downstream from Oxford to London to raise money for a fantastic charity.”

Although the core crew is in place, the three-man crew are looking for any individuals who would be interested in joining the boat for part of the journey, in return for a £100 donation. If you are interested, please contact: William Dockar-Drysdale via rebecca.mawle@shipstonhomenursing co.uk.

Donations can be made to support Shipston Home Nursing on the Virgin Money giving page, which can be found here “3 men in a boat”.

The men will be taking an original Thames camping skiff and plan to camp on board. 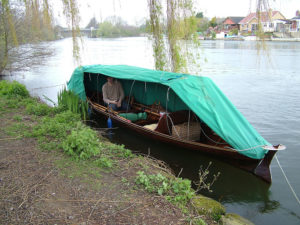 The gentelmen’s journey has been inspired by
Jerome K Jerome’s 1889 comic novel, Three Men in a Boat. 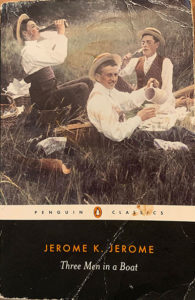